Treasured Dolls, a store on Level 3 in The Square Tallaght, were today celebrating a woman who gave a lot to the 1916 Easter Rising. Molly O’Reilly was a teenager when she marched with the Citizen Army to the GPO on Easter Monday April 24th 1916. She was born around 1900 in Gardner Street in Dublin joined Clann na nGaedheal the republican girl scouts movement at age 11.

According to republican-news.org, she volunteered to support the workers and their families during the Lock-out at just 13 and then helped organise a soup kitchen in Liberty Hall. Additionally a week before the Easter Rising at just 15, she raised the gold harp on green flag at Liberty Hall for James Connolly.

A week ago, Treasured Dolls posted a picture of their 1916-inspired dolls, called Molly as well (below) and Molly’s grandaughter Suzanne Corcoran saw it on Facebook. She decided to bring her Aunt, Molly’s daughter Constance (named after Constance Markievicz) Corcoran-Cowley in to the store to show her the dolls. 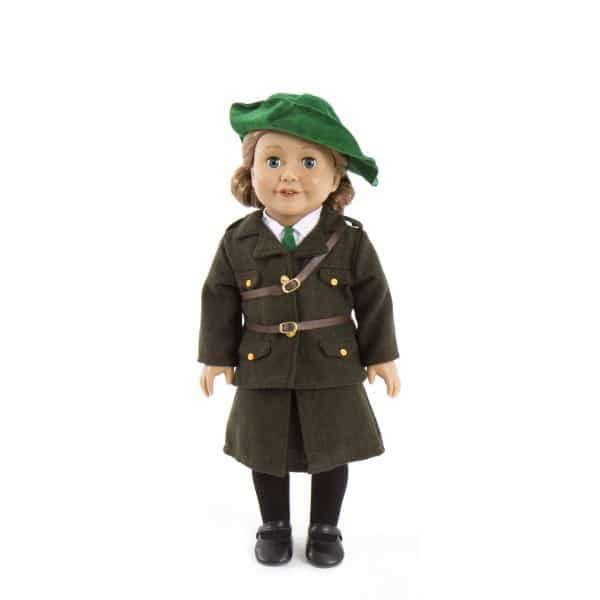 Molly, 1916 inspired doll at Treasured Dolls in The Square Tallaght

The manager of Treasured Dolls, Michelle McDonnell was so touched by her story and the great deeds of Constance’s mother Molly, that she invited her in to the store and gifted her one of the uniformed dolls today.

“It’s such an honour for us to have Constance and her family here. It’s just amazing how it happened.”

Niece Suzanne was close to tears as her Aunt Constance, or Connie as she is known, posed for photos with the dolls and the staff of Treasured Dolls. Her own daughter, Caitlin was also on hand to help her Grand-Aunt smile for the camera.

Connie told us that her Mother was “some woman.” She said:

“She was only 15 when she did all that. She left us some legacy. The dolls uniforms are quite good but the real skirts would have been orange!”

Connie then recalled a story of how Molly had to sneak back into the city after a rally one night but the boundaries were locked down. She shimmied up a post to climb over the wall but caught her skirt, which ripped all the way open. She had to knock on a door on Parliament Street to ask for some safety pins to fix up her skirt before heading home!